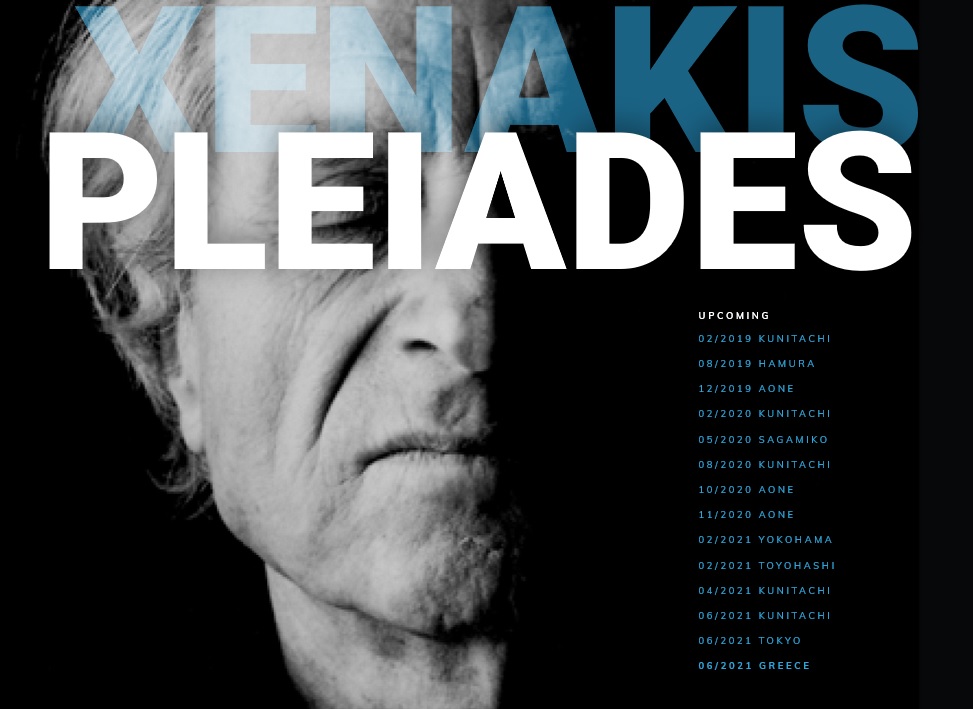 By combining the form of Prometheus and Iannis Xenakis, Olympolis Art Project aims at creating a cultural community under the shade of the great mountain of Gods. Our main goal is to appoint the need for a new path in communication and co – existence in human beings in the new era that is already here: the post – physical era.

Artists from four different countries are going to participate and co – operate on this artistic platform of “positive statements”:

Greece: motherland of the great composer and native land of his ideas.

France: where Xenakis and his innovative art were hosted.

Japan: where Iannis Xenakis’ talent was acknowledged for its uniqueness (he was prized with the  Laurear of the Kyoto Prize)

The main project – that will occur on the first day of this polythematic festival – is under the general title: Xenakis et le Japon. Its concept and ordination belongs to the world-wide famous percussionist, Kuniko Kato (cultural ambassadress of the city Toyohashi, in region Aichi). Xenakis et le Japon, is a polythematic/research scenic “drama” based on several of the works of the great composer (such as: Pleiades, O – Mega, Ais, Cassandra). This particular project started at 2015 and toured all around Japan, closing it first circle at June 2021. On stage, together with Kuniko Kato, will be 18 Japanese musicians and also several artists of the Noh Theatre, a research drama that aims at pointing the specific relationship of Xenakis’ work and the Japanese traditional musical aesthetic of theatre Noh and many more Japanese artists and participants.

This presentation of Xenakis work, under the conceptual and artistic management of Kuniko Kato, also embraces a visual interaction, via 3D projection mapping, that is ordinated and curated by an exceptional young Romanian artist, Lucian Emilian Matei. Lucian is specialized in combining new technologies and visual arts, and was several times awarded for his works.

Their contribution to this project will offer three famous and active choreographers and dancers: IoannisMandafounis(http://www.mandafounis.com/about#/biographies/), Ashley Write (https://www.sydneydancecompany.com/people/ashley-wright/) and Haris Gekas. Greek dancer and choreographer Haris is originated from Litochoro– Olympus, and is artistically based in France – his work either on stage as a dancer or as choreographer, is worldwide very well acclaimed.

In addition, Theodoros Kleissiaris, originated also from Pieria/Katerini (https://kleissonic.com/about) is preparing a research project on the access of the people with special needs to performing and visual arts.

The composer Dimitris Bakas created a sound installation “Statistical Perception”, the project is based on two central construction ideas, the statistical perception sound phenomena and the creation of sound material with sieve theory, something that is a kind of homage to the art of Iannis Xenakis. The aim of the project is for the visitor to have the experience of an artificial sound environment / phenomenon, perceived statistically, in correspondence with similar natural phenomena, such as rain. This broadens the listener’s perception and leads him to a primordial relationship with sound and sound phenomena, such as man lived prehistorically.

During the second day of PROMETHEUS I(annis) X(enakis), archive and photographic material of Iannis Xenakis life and work, will be exposed, in collaboration with C.I.X. (centreiannisxenakis) in Paris, together with audio and digital mathematic installations, educational programs for children, working groups for adolescents with the participation of the artists that were part of the Xenakis et le Japon project.

The main workshop “In search for a modern Prometheus” is ordinated by the Greek Actor/Director/Performing and Narrative Arts Teacher and also artistic curator of the project PROMETHEUS I(annis) X(enakis), Thomas Velissaris.

Olympolis Art Project is planned to take place in two different spots, during the period between June 21th and July 4th, 2021. The starting venue is at Anargirios and Korgialenios School of Spetses historical island at Friday 25th of June and the final at Sunday 4th of July at the Alexander the Great Foundation Olympus Mountain Katerini.

All the venues will be broadcasted by live streaming and online and we will create also a short film documentary for the backstage story of the project, parallel with narrations from Iannis friends with some unknowns information’s for his life.

We are ambitious that after the end of the first phase of the project, a smaller second one will occur in 10 different cities with the same character until the mid of September. We have high hopes the project will get an international tour on 2022. This is the year of the 100th anniversary of IannisXenakis’ birth and we believe a new need is going to create a bigger demand of Iannis Xenakis work. Our tour will start from Japan and then to other “second cities”, preferably former or next European Capitals of Culture.

We believe in cooperation and artistic interaction between inspired professionals and cultural organizations. We work for the education of the audience, the renewability and the social coherence.

We are searching for new paths of communication in this new era that is in front of us and we are creatively anxious about the future of Arts and Sciences in this post – digital era where the physical human body is changing and being denaturing via virtual reality, and we are waiting for the new form of human nature and condition.

Our project is supported by the Municipality of Katerini, the Region of Central Makedonia, the Great Alexander Foundation, the Greek Community of Luxembourg, the Hellenic Studies department – Chicago University, and also is supported by individual companies.

During the last years we were funded by: General Secretariat of Youth (2003), Olympus Festival (2008), Greek Tourism Organization (2013), and the Municipality of Katerini in 2019.

The new corona era global situation makes fragile all the programs and the festivals organization. Maybe in the future we must have to do some changes or postpone but in a way that also creativity